P and I were sat watching ‘First Dates’ the other night. There were a few people on the episode who struggled with conversation and didn’t know what to say when introduced to a complete stranger.

“Some people find it very difficult” I said. “It doesn’t come easily to most of us”.

“It’s always been easy for me” he said. “I could always pull birds with my banter, I was good at it! Now of course I don’t say anything. It’s just easier not to.”

P has always had the gift of the gab. It was his sheer cheek that attracted me to him the night we met, 17 years ago. He had all the chat, said all the right things and introduced me to his colleagues who were with him on their Christmas party. They obviously loved him, laughing along and joking around. He seemed to be the entertainer, the centre of attention I remember – keeping spirits high and getting everyone involved. He had a wicked sense of humour and I liked it!

We sat for a few minutes and mulled it over.

“It’s a cruel twist of fate really isn’t it?” I said. “Having all that taken away from you”.

“Yep”, P said, mournfully. “I can no longer do my two most favourite things….”

A wry grin appeared on his face. I’ll let you guys work out for yourselves what the second thing is. FFS.

Having a basic function taken away from you can fundamentally change who you are as a person. I’ve noticed the subtle differences in P’s personality and how Motor Neurone Disease is chipping away at his confidence as well as his physical capabilities. Of course, he’s full of the usual bravado on the outside, but he will no longer pick up the phone to make a call, even to order a takeaway, for fear of the person at the other end thinking he’s downed 10 Jaeger-bombs for breakfast!

However, that’s the only thing he shies away from. As far as everything else is concerned, it’s a personal challenge. When people ask me how P’s doing, there’s always a focus on what he can’t do. I’m as guilty as the next person, focusing on his slurred speech, his weak arm, his neck not being strong enough to support his (giant) head. But he doesn’t do that. He concentrates on what he CAN do. He does the housework. He does the washing. He does the ironing. He does the school run. He’s teaching himself how to use his left arm for most things. He still put the Christmas fairy lights on the bay trees outside, (even though he had to dance round them like they were tiny maypoles, to get the lights placed nicely)!

On a recent Christmas holiday visit to Stockeld Park, P decided on the journey over that he probably shouldn’t risk a fall on the ice-skating rink and he would sit it out this time. But lo and behold when it came to the crunch he just couldn’t say no. I watched as he clung to the side all the way round the rink, not daring to let go because he knew he wouldn’t be able to keep himself up. Stubborn sod he is. The kids then fancied a trip around the ski-trail. He agreed that we’d have a leisurely walk around the lake whilst they grappled with skis and poles, but as the boys emerged from the cabin all trussed up, so did P. “I can do it!” he said, as I rolled my eyes and set off on my solitary walk. Still, it meant I could laugh and point as the kids raced ahead and he bumbled his way down the track. Muppet. 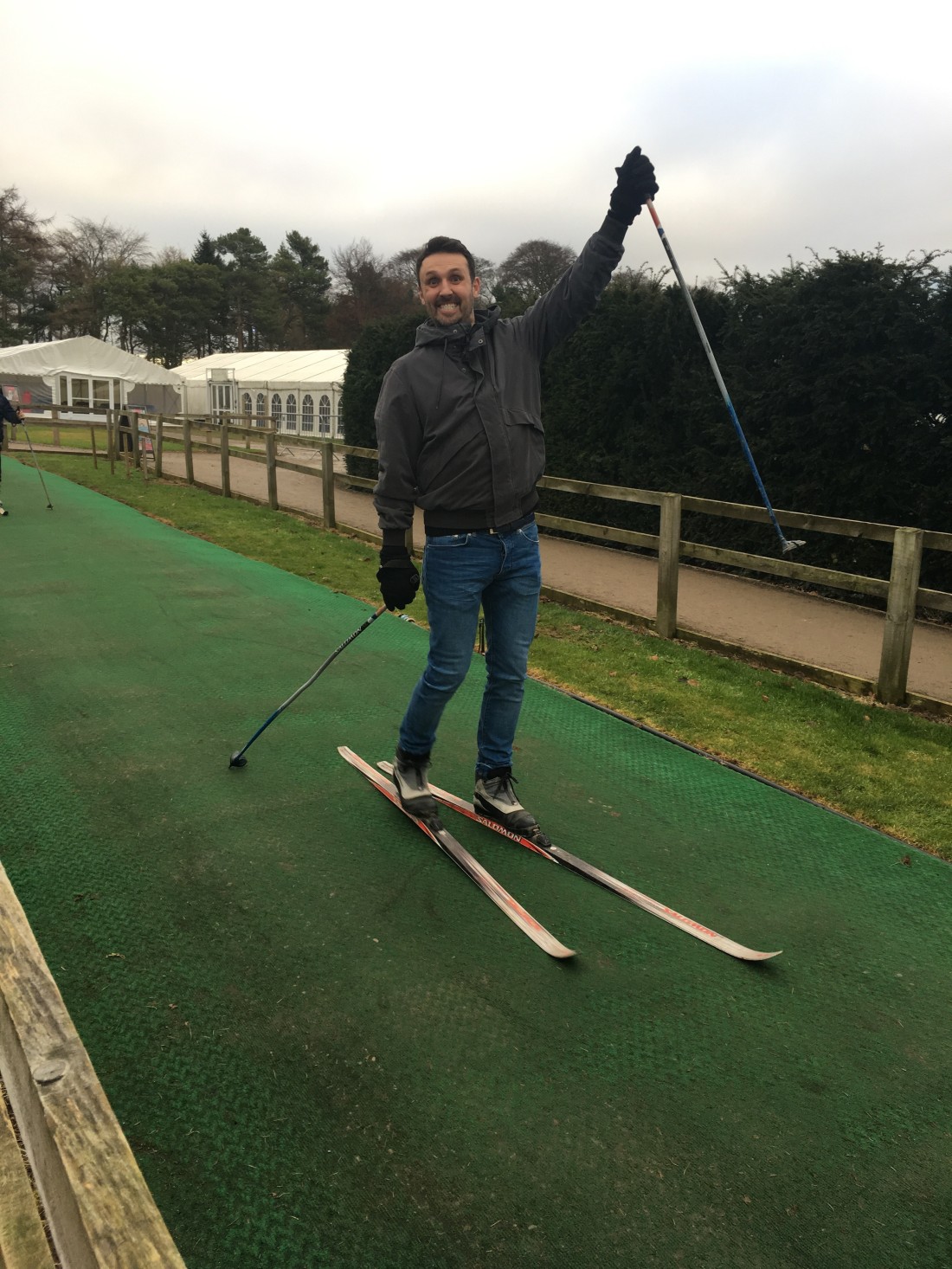 But this is who P is. He will not give in to what’s happening to him. If he didn’t continue as ‘normal’ he would go insane. Yes, Motor Neurone Disease is all about the body failing, but the mind does not. It never will. P knows that in a year or maybe two, he’ll be trapped inside a body that has simply stopped functioning, making him a prisoner within his own self. So, whilst P can still do stuff, no matter how hard, or whether he ‘should’, he will. For his own sanity if nothing else.

To that end, we’ve made a big family decision. I’d like to introduce you to Cozmo! He’s a beautiful Springer/Lab cross and we pick him up in a few weeks! Cozmo will be a welcome bundle of happiness, and the idea is that he will be support, comfort and distraction for the boys, both now and when things get tougher.

So…. P has now got some serious work ahead, with all the training and walking and turd-cleaning! Ah well, it’ll keep him busy. He’s more than capable after all.

I was sitting at my dressing table, trowelling the makeup on ready to face another day.  P was getting ready as usual, but this time when I looked round he was kneeling down, his head on the floor in some kind of praying position, trying to dry his hair with the hair-dryer he can no longer lift. “Let me do that for you” I said, trying to fight back the tears. “No” he replied. “There’s always a way”.

You see, my husband is dying. Sounds a bit dramatic doesn’t it? But the fact is, that at the age of 41 he’s been diagnosed with Motor Neurone disease and probably won’t make it to 45.

When I sit and write those words it sounds heart-breaking, and there are times when the world seems so black we can barely get through the day. There are times (although increasingly rare) that we don’t think about the diagnosis at all. But most days we face the music with humour as much as we can, because that’s the only way we know how to cope.

For example, P used to enjoy singing. He would sing during a long commute in the car, in the shower, around the house; he was always belting out some tune or other. He never got the lyrics right. He would sing the most random words to songs (think Peter Kay’s “just let me staple the vicar” routine). And he was flippin’ LOUD! He still tries to sing occasionally, but the signals from his brain to his speech muscles no longer work properly, so when he’s three lines behind the rest of us I can’t help but laugh at how ridiculous he sounds! He says I’m an evil b*tch for doing so. But if I didn’t laugh I’d probably cry.

Comedy falls are also hilarious of course. P’s core strength is now so weak he can’t stop himself from hitting the deck when he loses his balance, like most of us can. You can imagine the fun we’ve had in the recent icy conditions! Whilst we were out on a country walk last weekend he totally lost his footing in a muddy field, and because his arms are too weak to break his fall, he ended up covered in mud from head to toe. The boys were laughing for hours!

But I have decided to write this blog for a more serious reason. Me, P and the boys all know that over the next year, or perhaps two, he’s going to become a man we don’t recognise. He will be with us, but trapped in a body he can’t control, and his voice will be heard through a computer. I don’t want to forget him. I want a record of this part of our life, both good and bad and everything in between.

So, this is the first of many blog posts about how this ‘short circuit’ in P’s brain is taking hold. It might make you sad at times, but my intention (for those of you who know him) is to take some comfort in the fact that that my wonderful husband is facing this illness with strength and positivity. Something that helps me and our two boys through the most difficult days.